The members of the Serve First team are all dedicated, passionate and experienced individuals with one goal - to help people enjoy the community in which we live.

Tennis has occupied such a major part of Caroline’s life she can’t even remember when she first picked up a racquet...
View more

Tiffany is a Winston-Salem native and began her love of tennis at age 9 when the famed Coach David Lash picked...
View more

Tennis found Jim in his grandmother’s attic where he found a wooden Dunlop at just 8 years old...
View more

Communication and Community Outreach
With nearly 25 years in media and public relations, Robin brings a wealth of knowledge, expertise, and business acumen to this partnership...
View more 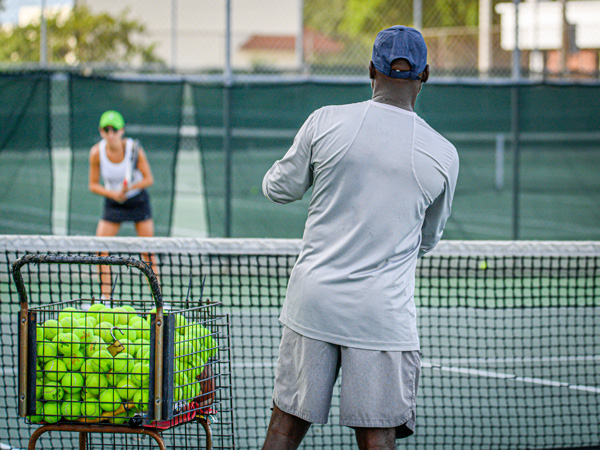 Tennis has occupied such a major part of Caroline’s life she can’t even remember when she first picked up a racquet.

“It was pink, though. I remember that. My sister had a purple racquet. It was a thing.”

Her father taught himself to play – and play so well he put himself through college with a racquet in his hand.

“My dad never had a coach or anything, so he wanted my sister and I to have the chance to learn properly. He provided that. I remember playing in tournaments when I was 11.”

By the time she was in high school, Caroline had a top-10 state ranking in the Girls 16s in Virginia and a top-50 ranking in the Mid-Atlantic region. She won four team, three doubles, and two “triple crown” state championships – meaning she took home titles in singles, doubles, and the team championships all in the same year. She also lettered in five other sports: cross country, golf, swimming, track, and volleyball.

Tennis would continue to be Caroline’s focus as she began a career at the United States Tennis Association in its Virginia headquarters. She moved to North Carolina in 2011 and took a position with NC Tennis as a college and junior coordinator. In time, she worked her way up to the associate executive director position, helping to create programming that would bring new people to the sport she so loves.

In 2020 during the COVID-19 pandemic, Caroline decided it was time to refocus on her roots – community tennis. She took up a teaching position at Old Town Country Club with a renewed vigor for coaching and mentoring.

When the opportunity to get involved in public tennis in Winston-Salem presented itself, she and her family decided it was the next big step.

“This makes my heart so happy. Seeing all these people come together to play and make fast friends is worth all the work. Especially with kids – if we can put a racquet in their hands between 7 and 10, it can change their life. When existing players come to the park, though, I want them to feel part of something, part of a community. Our hope is that their experience will be about more than just a match.”

Tiffany is a Winston-Salem native and began her love of tennis at age 9 when the famed Coach David Lash picked her out of a crowded auditorium at the Winston Lake YMCA to participate in a tennis demonstration.

Coach Lash was an advocate of bringing athletes of color into tennis, and the time he invested in Tiffany changed her life.

“I remember it was an after-school program, and he sat there and waited for my mom to get off work and pick me up. He asked her if she would let me try tennis at 6:30 in the morning at Wake Forest Indoor on a Saturday. The rest is history.”

Tiffany went on to play at East Forsyth High School where she lettered in both tennis and basketball. She was the top seed for the duration of her high school career, dropping only one conference match in singles and making the All-Conference team each season. She was conference player of the year from 1993-1996 and was voted MVP each of those years. During her senior year she finished third in the 4A Metro State tournament and was inducted into the EFHS Hall of Fame in 2015.

Tiffany also won the American Tennis Association Girls 18s National Title in 1996 and qualified for USTA Zonals in 1995 and 1996. She took home the 1995 title in the North Carolina State Closed Doubles championships and finished third in the North Carolina Closed Singles in 1996. Her 1997 ranking topped at number 8 in North Carolina and number 30 in the Southern region.

Howard University in Washington, D.C. awarded Tiffany an athletic scholarship, where she played within the top 3 in both singles and doubles for each of her four years. In 1998 she won her conference’s Freshman of the Year award and is a two-time Division I ITA scholar-athlete.

In 2001, Tiffany received her bachelor’s degree and completed the physician assistant program, also at Howard. When she is not busy with Serve First Racquet Sports, you can find Tiffany working at Novant Health as a PA in cardiology. She also serves on the board of the Kimberley Park Tennis Association and has been an assistant coach in Winston-Salem at Tennis for Life for the last 10 years.

“Tennis opened a lot of doors for me, and I’m hoping to give that back to others. I want to give back to the community which gave so much to me and to my family. We are really excited about this partnership and engaging the people of Winston-Salem.”

Tiffany and her husband Mike live in Winston-Salem and have two daughters, Kyndall and Mikalya.

Tennis found Jim in his grandmother’s attic where he found a wooden Dunlop at just 8 years old. His dad gave him some tennis balls, so he began hitting against the house. Without a coach, Jim spent his time reading about tennis and learning the fundamentals. By the time he was in middle school, Jim was competitive on his middle school team.

Over the next few years, Jim worked with passion through high school and even qualified for the Orange Bowl, one of the most important and prestigious junior tournaments in the world.

“I lost in the first round, but I had a great experience. I was competing alongside guys like John McEnroe.”

His tireless dedication to the sport put him through four years of college tennis at the University of St. Thomas in Houston. He also served six years in the Air Force Reserves and worked in epidemiology, studying diseases and other factors relating to health.

Jim has been a coach for the last eight years and has lost none of the joy he originally experienced at his grandmother’s house.

“I like socializing and meeting different people. I get so much satisfaction out of sharing the skills I have acquired from others. Tennis is an ongoing learning experience, especially with the way the game is changed today. I like mixing old school with new; they can be integrated. I’m also motivated to learn and teach life skills. Tennis makes you think and reason. You have to discern what makes sense and what doesn’t. Tennis is about decision-making which is applicable to life.”

He enjoys all types of performing arts as well as outdoor activities like camping and hiking.

Robin does not have the tennis chops her colleagues at Serve First possess. Instead, it is her communication background that makes her a good fit to promote relationships and racquet sports in Winston-Salem.

With nearly 25 years in media and public relations, Robin brings a wealth of knowledge, expertise, and business acumen to this partnership. She began her career in broadcasting while in college never looked back. After nearly 10 years in journalism, she transitioned into corporate and non-profit communication, where she has spent the last 15 years honing these skills.

Robin wears many hats – professor, media director, photographer, videographer, content creator, strategic planner, brand manager, writer and more. She is involved with Serve First due to her desire to provide others with the same tennis community she has enjoyed.

“In 2006 when I left television, I was still pretty new to Winston-Salem. I had only spent time with my co-workers. I wanted to meet people and really get plugged in if I was going to stay here. I remembered that I used to enjoy tennis in high school, so I got involved on a whim. My first-ever match was at Hanes Park, and I was terrified. Everyone I met, though, was warm and inviting. Tennis changed the whole course of my personal and professional life.”

Robin graduated from the University of Virginia in 2000, but tennis introduced her to people who introduced her to the idea of going back to school for a master’s degree – which she did. In 2018, Johns Hopkins University awarded her an MA in Strategic Communication – a subject she now teaches at as an assistant professor at High Point University. Robin is also the media director at the Winston-Salem Open, an award-winning men’s professional tennis event and consults as communication strategist with Blue Wagon Group, a public relations firm based in Virginia.

“I can point to tennis and draw a line to almost everything and everyone else that’s become a part of my life in Winston-Salem. I would not have the education, friends, family, business connections or even confidence without this sport. I hope Serve First can help provide that kind of value and acceptance to someone else.”

Robin is an avid recreational player with a 4.5 NTRP. She is also Safe Play certified.